If you are like me and think that the rapidly changing regulatory landscape and public opinion about marijuana will unleash tremendous investment opportunities, then you want to understand the players, the challenges they face and the potential rewards to those who invest. This is why I am launching 420 Investor, with the goal of being the premier information source for those looking to capitalize on the "Green Rush". As the wild action of 2013 has shown, the road may be bumpy. My ambition is to provide unbiased information and insightful analysis to help investors navigate the inevitable volatility. Our focus will be not only on those companies that are currently trading in the public market but also private companies that are blazing trails.

My journey to becoming the "Cannabis Financial Analyst" hasn't been so obvious. Those familiar with my work since February, a period during which I have published several articles on Seeking Alpha, may think that I am anti-cannabis, but nothing could be further from the truth. While it's been over two decades since I have enjoyed it, I have long been a supporter of full legalization of marijuana. In fact, before I had even experimented in college, I publicly supported legalization as a card-carrying member of the Libertarian Party as a 15-year old in 1980 who volunteered in the Presidential campaign. More recently, I have gained an appreciation for the potential medical benefits of cannabis that I think creates significant opportunities to help sick people as well as serve as a catalyst for economic growth. At 420 Investor, we will focus on companies that can benefit from recreational or medical cannabis.

When I looked at the publicly-traded stocks in February, I observed many signs of a bubble. With the continuing adoption of medical marijuana (now 20 states) and legalization approved by the voters of Washington and Colorado, it's no wonder that investors have embraced the publicly-traded stocks. Wall Street hasn't yet gotten aboard, as only one stock (G.W. Pharma) has received any sort of coverage by analysts. While a few people, like me, have shared their views publicly, the vast majority of information has come from either press releases or paid research, neither of which is particularly objective. Further, almost all of the publicly-traded stocks trade OTC, with many not fully reporting. In other words, there is a void of information, and much of it is conflicted.

I believe that I am the first "Cannabis Financial Analyst", and I am uniquely qualified for this role. I first invested as a teenager in 1978 and entered the securities industry in 1986 after graduating from college, spending eight years in NYC on Wall Street. After managing billions of dollars in bond investments, I made the transition to stocks professionally in 2000 and was a partner at a firm that managed more than $500mm on behalf of individuals and institutions until I started my own independent advisory in 2007. I earned the designation of Chartered Financial Analyst in 1997 and have fulfilled the continuing education requirements for each of the past 15 years. As an independent analyst, I have developed a strong reputation with my institutional clients, my readers on Seeking Alpha and the subscribers to my newsletters for generating well-researched ideas. More importantly, from early in my career, when at the age of 23 I turned in my boss after uncovering his illegal activities, I have constantly adhered to the highest ethical standards. You can count on me to provide objective analysis in a completely transparent manner. 420 Investor will be fully funded by subscribers, and everything we do with the service is for their benefit. Well, we may take advertisements like this: 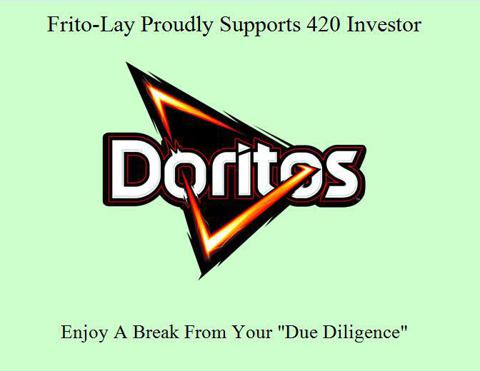 Kidding aside, independent and objective analysis is what 420 Investor is all about. But, it's about a lot more than just that, as I expect that subscribers will enjoy both the interaction with other members of our community as well as access to industry leaders who will be providing exclusive interviews and even participating in live events. So, why 420 Investor? High quality, unbiased information, all aimed at helping our members to best capitalize on the many opportunities that will present themselves to Green Rush investors in the years to come.

Join us at 420Investor.com

I hope that you will consider joining our community. We are offering an introductory trial for just $4.20 for two weeks (Code = "Mary"), and you can lock in a full year at about $4.20 per week ($220). We also offer monthly access for $22. With membership, you will get access to the following:

I look forward to your participation! Click here to check it out.